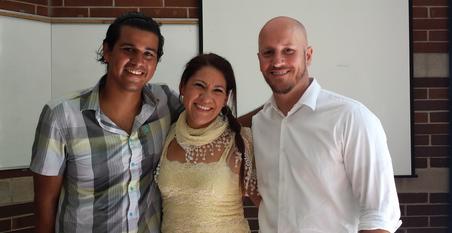 Juan Carlos was born and raised in El Salvador, where he obtained a Bachelor’s in Science Majoring in Psychology at Universidad Centroamericana José Simeón Cañas (UCA). After finishing his undergraduate studies, Juan Carlos worked in a church community clinic and in private practice, providing low cost therapy services to clients of all ages and backgrounds. In 2013 he was awarded a Fulbright scholarship to attend San Diego State University’s Masters in Marriage and Family Therapy program with an emphasis on Social Justice, Multiculturalism and community engagement. Following the completion of his Masters, Juan Carlos worked for a year as a Bilingual Case Manager with the homeless population in San Francisco, supporting primarily undocumented, Spanish speaking clients.
While attending San Diego State University, Juan Carlos collaborated with professors and colleagues to create an El Salvador Immersion program. Each year, international therapists and other professionals visit El Salvador and engage with local communities to learn about the foundations of Liberation Psychology, the country’s history, the effects of the recent civil war and ethical implications for therapeutic practice. Upon returning to El Salvador in 2016, Juan Carlos has been working as a Professor teaching Undergraduate Psychology students, facilitating Mental Health Workshops in partnership with Non-Profit agencies, seeing clients in private practice, and assisting in research on the historical roots of violence in the country. In August of 2018, he will begin a Doctoral program in Critical Social/Personality Psychology at City University of New York.